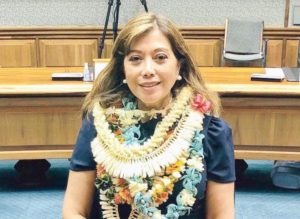 “I was born in a charity ward [in Pasay]… and lived my early childhood on Mapagkalinga Street,” recalls Bennette Espineli Misalucha, now Senator of Hawaii State’s District 16, in the opening of her interview with the CFO. The eldest daughter of a teacher and a milkman then, she narrated how her parents, Benjamin and Avelina Misalucha, journeyed from humble beginnings to raising their family in Manila first then Davao, and finally Cebu, before migrating to the United States in the early 80s.

Serving others came naturally even to young Bennette. At the tender age of 14, when most teenagers are spending their free time with friends or watching television, she volunteered to teach Sunday school to the poor living in the mountains of Cebu. In that time of Martial Law, she ended up teaching basic cleanliness instead.

That experience planted the seed of her lifelong commitment to serve others, something she attributes to her family’s strong religious faith.

Another family belief is in education being a great equalizer. She spent most of her elementary and high school years at Philippine Women’s College in Davao City, then transferred to University of Southern Philippines Lahug in Cebu City, where she graduated salutatorian of her high school class.1 of 5

With fellow awardees at a Filipino community gathering

Misalucha at work at KHON Channel 2

Misalucha family portrait, with Bennette at bottom left
“I’ve always wanted to be a doctor,” she said, “I thought, there was no impediment to me fulfilling that dream.” But her father, who was after his own schooling, progressed from being a milkman to pharmaceutical representative to Regional field manager, called her aside one day to ask her seriousness about it. He pointed out, without any ill intention of discouraging her, that if she were to study medicine, the whole family will have to make sacrifices. Being th eldest of five children, Misalucha didn’t have the heart to see her siblings get less than they deserved of the family’s fairly adequate resources. Without a second thought, she changed plans.

On a whim, she decided to major in Communications, mainly because she wanted to keep hanging out with her best friend, who enrolled in that program.

During her senior year at the University of the Philippines-Cebu, Misalucha interned at Channel 3, which later became ABS CBN Cebu, where station manager Rudy Ylaya, told her, “I know you are still in school but I have an opening. Would you like to put your name in?” In a world where most of her peers were still trying to get their foot in the door, she grabbed the opportunity, all the while thinking that the Heavens must have known where her natural talents can be of best use to her community.

A highlight of her 4-year professional journalism career (1980-1984) in Channel 3 Cebu was covering the tensions between the NPA and the Philippine Constabulary (PC) in Southern Leyte, which claimed the lives of innocent civilians, many of them children and minors.

When her parents decided to migrate to the US, she joined them with the intention of finishing her Communications degree there but eventually coming back home to her media career in the Philippines. She earned her Bachelor’s diploma at the University of Hawaii – Manoa, but ended up staying when she fell in love with a local born Filipino-American attorney, an Ilocano by ancestry, with whom she has two adult children, Christian and Danielle Anne.

Misalucha started her professional years in Hawaii as a news reporter and consumer advocacy segment producer at KHON Channel 2, then the highest rated news station. She would later continue her media work by founding her own business strategy and communications firm in 2008 and as Managing Editor of the Fil-Am Courier, Hawaii’s longest running ethnic paper, from 2013 to 2019.

“When I arrived in Hawaii, I noticed there were a lot of second or third generation Filipinos who were embarrassed about their identity,” said Misalucha, appalled by this attitude. And thus began her lifelong work of changing hearts and minds, leading Filipino organizations and bridging networks to inspire younger generations to be proud of their heritage.

This is an advocacy she is strongly committed to, personally. For example, she has taken many young second-generation Filipino-Americans on humanitarian missions to the Philippines and mentored young women of Filipino ancestry on how to navigate careers and life decisions.

Even when she entered corporate life as a banker in 1989, rising to the level of Senior Vice President during her 17 year banking career (and only the second woman Senior Vice President in the bank’s 50-year history), Misalucha says that she always looked for opportunities to serve others—driven by an authentic desire to be of use, to make a difference.

This is reflected in her mile-long list of community organizations which she had either chaired or served on the board. Amongst them are the Girl Scouts of Hawaii, YMCA, Chamber of Commerce of Hawaii, YWCA, Chaminade University of Hawaii, Hawaii Public Radio, Oahu Transit Services (The Bus), the Filipino Community Center, the Philippine Cultural Center of Kauai, the Congress of Visayan Organizations (of which she is the current President) and the Filipino Chamber of Commerce of Hawaii. To be continued next Friday.

This was earlier published in the Manila Times on Friday, April 23, 2021